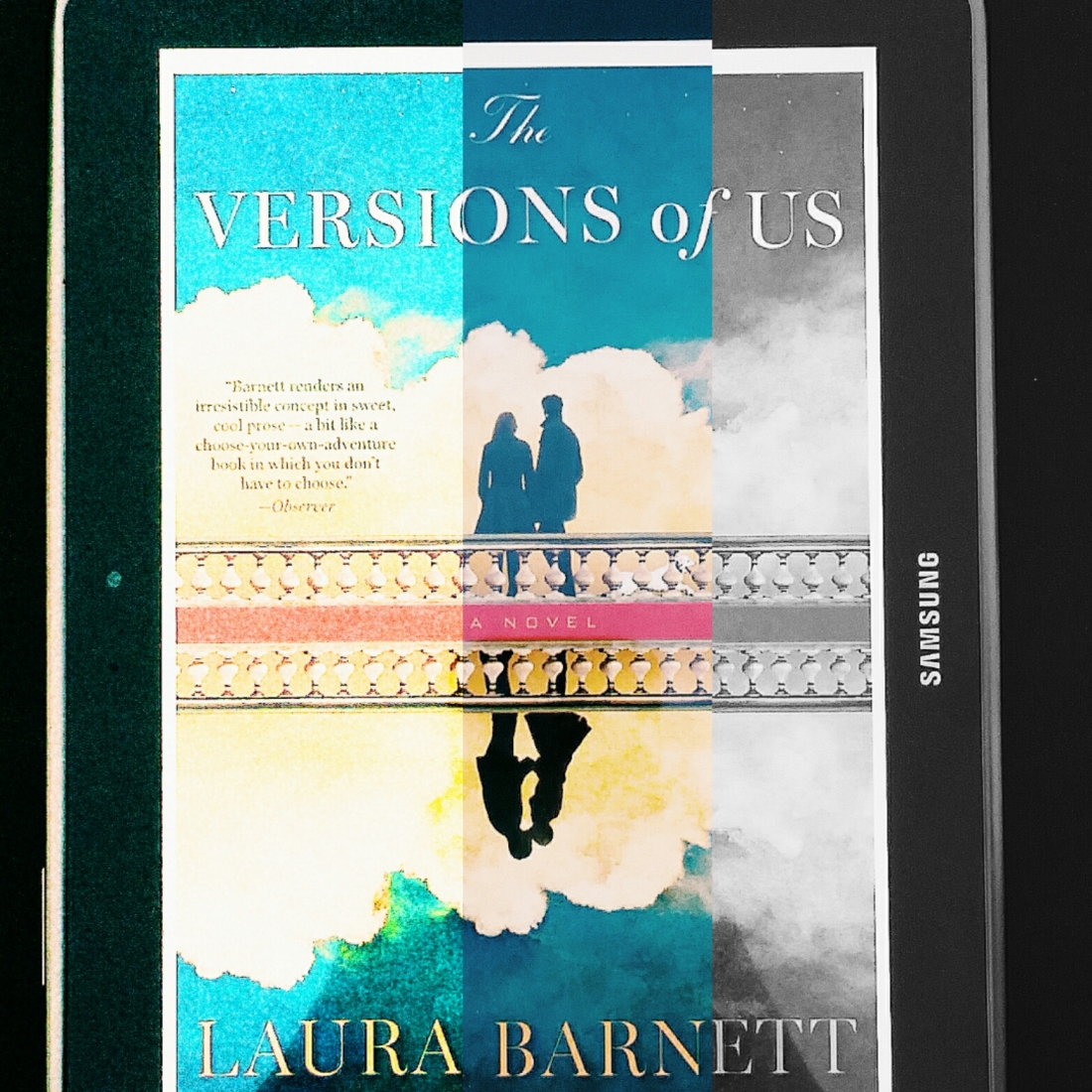 A young woman with a broken bicycle. The man she might, so easily, have missed: cycling past, not stopping, carrying with him a whole life, a life that might never have been hers to share.

The Versions of Us follows Eva and Jim through three potential lifetimes and examines how the choices we make ultimately dictate our path. It all begins with a brief encounter that varies from a half-second to a few minutes- Eva on her bicycle and Jim walking in his trench coat. The events of that day set into motion a chain reaction which heavily colors both Eva’s and Jim’s futures.

She watches his face and it strikes Eva, with a certainty that she can’t possibly explain- she wouldn’t even want to try- that this is the moment: the moment after which nothing will ever quite be the same again. She could- should- say no, turn away, wheel her bicycle through the late-afternoon streets to the college gates,  let the porter’s boy come blushing to her aid, offer him a four-bob tip. But that is not what she does. Instead she turns her bicycle in the opposite direction and walks beside this boy, this Jim, their twin shadows nipping at their heels, merging and overlapping on the long grass.

In versions one and three Eva and Jim begin their lifetime together, the length of which varies, while in version two they go their separate ways. As a result of this parting Jim spends much of his time caring for his ailing mother and Eva marries her college beau, a narcissistic acting student named David. She is satisfied for a time but feels a longing, deep within herself, for something more.

David is so clever, so brilliant, so charming. He makes me feel that with him, I could do anything, go anywhere. I do love him, I know I do. And  yet this horrid, stubborn little part of me insists that what we have together isn’t real, somehow- that it’s some kind of shallow imitation of love. I’ve been thinking about Plato’s cave, about that terrible idea that most of us spend our lives with our backs to the light, watching shadows on the wall. What if my life with David is just that? Suppose it’s simply not the real thing?

A chance meeting between Eva and Jim at the theater illuminates the connection between the two and sparks the question of fate and whether they are meant to be together.

As they talk, Eva has the sense that she is drifting further and further from the room, into a border-less place where time fractures, loosens, and there is only this man, this conversation, this inexplicable sense of profound connection. There is no other way she can describe it, though she is not yet trying to describe it to herself- she is simply here, intensely aware of the moment (the nearness of him, the soft rise and fall of his voice) as the rest of the world drops away.

In version one it is made possible to see how their life appears together. Given the almost predetermined nature of their meeting it is assumed their relationship should be of the lasting kind. However, unsettled by the death of his mother and unfulfilled by his career, Jim loses sight of what matters most.

He has gone against the natural law of things: the law that says you get one chance at happiness, with one person, and if it falls apart, you do not get that chance again.

Searching for fulfillment, Jim is unfaithful and chooses to set off on his own path with another, leaving Eva behind.

In the months of Jim left, Eva had experienced what she might now grudgingly call a breakdown, though the term felt imprecise. It was less a breaking down than a cleaving in two: she’d had the surreal sense that the route of her life had bifurcated, and she had found herself stuck on the wrong path, with no means of tracing her way back. Easy to think of Dante- and she had, of the via smarrita, the right road lost.

In version three Eva and Jim begin a consuming romance which ends suddenly when Eva discovers she has fallen pregnant and chooses to marry the father- David. This lifetime is wrought with the question “what if?”. Again, Eva unexpectedly meets Jim at the theater where they reconnect and Eva futilely attempts to rekindle the relationship but is held back by fear of the unknown consequences.

That New York morning had dawned bright and uncompromising, and Eva’s fear had been such that she could not go. She could not conceive of a version of that day in which she would leave Rebecca with her great-grandparents a stroll off in the autumn sunshine to the public library, and into- who knew what? An affair: a new beginning. The taking apart of everything in favor of an uncertain future.

However, versions of this and more are explored throughout this story. Simply The Versions of Us is a story of romance, fate and choice. But it is written in a much deeper and more complex way- each version examining, in its own way, infidelity, sorrow, loss, love and family. Spanning nearly 80 years, Laura Barnett have crafted an intricate tale that illuminates the fascinating complexity of life.

“I have this terrible feeling that everything from then on has just been wrong, somehow. That none of it was meant to happen.” “You don’t really believe that anything is meant to happen, do you?” Eva speaks quietly, so that only he can hear, “No. Maybe not. Who knows?”

A review copy of this title was provided via Netgalley.

12 thoughts on “Book Review: The Versions of Us by Laura Barnett”